The Island of Timor is currently divided in two parts: the West is part of the Republic of Indonesia with provincial capital in Kupang; while the East, whose capital is Dili since its independence, had been a Portuguese territory since the 16th century. When the first traders and missionaries reached the coast of Timor in 1515, the island was organized in small states, ruled by two kingdoms, Sorbian and Belos, who practiced animism. Islam, a religion that is still prevalent in Indonesia, has never reached Timor. Even Buddhism, extensively practiced in Java, especially in the 13th century, did not prevail.

During the third quarter of the 16th century, the first Portuguese Dominican priests arrived in Timor and started developing a progressive religious influence, even as the Portuguese domination was still being settled. Culture developed in an opposite direction to that of today's Indonesian islands of Java and Sumatra and of the coasts of Kalimantan and Sulawesi, where Islam was the dominant religion.

In 1651, the Dutch invaded Kupang in the Western end of the Island of Timor, and took control of half of its territory. In 1859, the Dutch concluded a treaty with Portugal to determine the border between the Portuguese Timor (present-day Timor-Leste) and the Dutch Timor (Western Timor). Upon Indonesian independence in 1945, Western Timor was integrated into its territory.

Timor-Leste during the Second World War

During the Second World War, the Allies (Australians and Dutch), aware of the strategic position of Timor, established positions in the territory and got involved in bitter fighting with the Japanese forces. Some tens of thousands of Timorese lost their lives while fighting side-by-side with the Allies. In 1945, the Portuguese administration was restored in Timor-Leste.

Between 1945 and June 1974, the Indonesian Government, in compliance with International Law, affirmed at the United Nations and to the outside world that it had no territorial ambitions towards East Timor. Based on Resolution 1514 (XV) from December 14, 1960, Timor-Leste was considered by the United Nations a non-autonomous territory under Portuguese administration. From 1962 until 1973, the UN General Assembly approved successive resolutions, recognizing Timor-Leste’s right to self-determination, as well as of the other two existing Portuguese colonies. In Portugal, Salazar’s regime (and, afterward, Marcelo Caetano’s) refused to recognize that right, stating that Timor-Leste was a Portuguese province equal to any other.

The April Revolution (April 25, 1974), which restored democracy in Portugal, consecrated the respect for the right to self-determination of the Portuguese colonies. In order to promote the exercise of that right, on May 13, a Committee for the Self-determination of East Timor was installed in Dili. The Portuguese Government authorized the creation of political parties, and as a result, partisan organizations emerged in Timor-Leste: the UDT (Timorese Democratic Union) called for "Timor’s integration in a Portuguese-speaking community"; the ASDT (Timorese Social-Democratic Association), which would later change its name to FRETILIN (Revolutionary Front for an Independent East Timor), supported the right to independence; and the APODETI (Popular Democratic Association of Timor) suggested “integration with autonomy within the Indonesian community”.

In 1975, with the dissolution of the Portuguese colonial empire, local liberation movements increased. In May 1975, the authorities in Lisbon presented a project to the main Timorese parties and, after hearing them, a law was published on July 11 that foresaw the nomination of a Portuguese High Commissioner. This same law expected the election of a People’s Assembly in October of the same year, in order to establish a political status. The diploma foresaw a three-year transitional period.

A local program of progressive decolonization was already taking place since January 1975. As part of this program, elections were held in the Lautem district for regional administrative leadership. The result of the first popular consultation made clear APODETI’s lack of support and the Timorese people’s refusal to accept integration by democratic means. Long before those regional elections were held, it was quite obvious for any independent observer visiting the territory that the overwhelming majority of the Timorese rejected integration into Indonesia. Cultural differences were one of the main reasons.

On the pretext of protecting its citizens in Timorese territory, Indonesia invaded the eastern part of the island and declared the island as its 27th province, renaming it Timor Timur. Indonesia was given the tacit support of the American Government, which saw FRETILIN as a Marxist organization.

About one third of the country’s population, more than 250 thousand people, died during the war. The Portuguese language was forbidden, and the use of Tetun was discouraged by the pro-Indonesia government by strongly criticizing the press. This same government also limited the access of international observers to the territory until the forced resignation of Suharto in 1998.

In 1996, José Ramos Horta and the bishop of Dili, D. Ximenes Belo, were awarded the Nobel Peace Prize for their dedication to the defense of human rights and independence of Timor-Leste. In 1998, with Suharto’s resignation and the end of the "Indonesian economic miracle”, B.J.Habibie was immediately sworn in as President. He later announced that he was willing to hold a referendum on autonomy (with integration into Indonesia) or independence for East Timor. The referendum took place on August 30, 1999, with the participation of more than 90%. 78,5% of the East Timorese favored independence and rejected the autonomy suggested by Indonesia.

Nevertheless, pro-Indonesia militias went on a rampage, assaulting UNAMET headquarters (the observers of the United Nations) and forcing Bishop Ximenes Belo to flee to Australia, while Kay Rala Xanana Gusmão took refuge in the British embassy in Jakarta. The wave of murders continued, promoted by the anti-independence militias and supported by members of the Indonesian army dissatisfied with the referendum results.

The images stirred protests all over the world at Indonesian, US and British embassies, and even at the United Nations, demanding a hasty intervention to put an end to the murders. There had never been so many popular demonstrations in Portugal, from the North to the South, since April 25, 1974. For the first time, the Internet was strongly used for broadcasting pro-Timor campaigns and encouraging a harsh UN intervention.

Intervention of the United Nations

Finally, on September 18, one contingency force of “blue berets” (an international military force) was deployed to East Timor, consisting initially of 2500 men, later extended to 8000, including Australians, British, French, Italians, Malaysians, North Americans, Brazilians and Argentineans, among others. The peacekeeping mission, led by Brazilian Sérgio Vieira de Mello, aimed at disarming the militias and supporting the transition process and the country’s reconstruction. 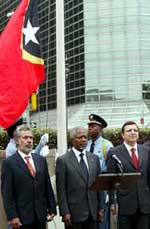 Portugal and many other countries organized campaigns in order to collect donations, provisions and books. The situation was slowly taken under control with the progressive disarming of the militias and the beginning of the reconstruction of houses, schools and other infrastructures. Xanana Gusmão returned to the country, as well as other Timorese who had gone into exile, including many with university education. Elections were held for a Constituent Assembly that became responsible for drafting Timor-Leste’s Constitution. This document came into force on May 20, 2002, on the same day the country was given its sovereignty. This day is now known as Restoration of Independence Day.